skip to main | skip to sidebar

From Daddy to Drake

Written by Rich:
Dear Lord in the heavens above
I ask you for a surgical hand with a glove
For our baby has a hole in his heart
And now it needs to be taken apart.
Lord oh Lord in the heavens above
The baby you’ve sent us is very loved
We thank you for him every day
And we cherish the moments we get to play
The doctors say he’s got something called a VSD
Now, this calls for surgery
Please guide our surgeon with a steady hand
Today
Tomorrow
And the day it’s planned
We thank you for Drake every day
So please, I beg of you to let us continue to play play play.
Posted by Momma Lioness Michele at 9:00 PM 1 comment:

A Heart Full of Love*

Our Drakie was a bit of a grouch when he was first born. His newborn photos have the same, scrunched up facial expression.


Once Drake began to smile, however, his entire face changed. His sweet, toothless, open-mouthed smile lights up his face, and our world. This baby smiles ALOT. He is a happy boy.


His heart, no doubt, is full of love. Love for his family, ESPECIALLY his Big Brother Luke, who Drake already idolizes. Full of love for his toys, for his special blanket, for outside. He loves to eat, loves to be tickled, loves to be read to and cuddled with. His heart is truly full of love.
But it is not full.
Drake was born with a hole in his heart that we hoped would heal with time. During his April cardiology visit, we were told the hole is too big to close on its own, and Drake's heart was working too hard to cope with the hole for us to leave it alone. He needs surgery, we were told. Open-heart surgery to repair the hole. To make it physically full, the way it is already emotionally full.
His operation is this Monday, August 15th. Please keep our Drae-Drae in your thoughts next week. If you're the praying type, please send some his way. We'll be in the hospital all week with him while our loving family takes turns being entertained by Luke's company.
The doctors and surgeons have assured us that this is what they do, this is what is routine to them. But it's a nightmare for us. So maybe say a prayer for Rich and me too.
We can't wait for this to all be behind us, for Drake's beautiful heart to be full, in every way.
xoxo, Momma Lioness Michele
* Big props to those that recognize where this line is from!
Posted by Momma Lioness Michele at 8:42 AM 2 comments:

This guy came into our lives on January 9th, and our world forever changed for the better. 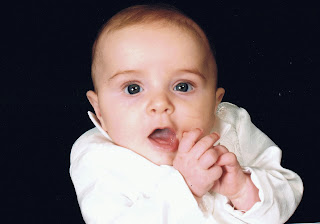 Happy 7 months, Drake.
We love you more than you can ever imagine.

It's been a long time.
I've missed you.
But it's a new year - to me, at least.
Yesterday was my birthday.
Today is my first official day being 37 years old alive.
Lots of things have happened since I last wrote on my blog.
Life-changing. Energy-sucking. Time-erasing things.
No-way-can-I-keep-up-my-blog types of things.


But I want to try, again.
So here goes!
Happy Birthday to Me.
Happy Rebirth to my Momma Lioness Blog!

Posted by Momma Lioness Michele at 11:10 AM 3 comments:

Our baby news that everyone knows already...

Hello out there! So, what's been happening since my last post, when I announced my pregnancy? The most significant thing to report is that we found out our baby's sex at our 20 week ultrasound. Luke will be a big brother to a little BOY!
I cried tears of shock and Rich nearly cried with joy when we saw the tell-tale peesch on the screen. Nothing about this pregnancy, from how I feel to how I look, has been similar to when I was expecting Luke. But interestingly, during this major sonogram, the first image of this new baby was the same exact one we first saw when we had our 20 week ultrasound with Luke.  This image - which happened to be the view from up between his legs, showing off his goodies so there's no question as to his sex - was honestly the first connection I saw between the 2 brothers. Luke is certainly not shy, and apparently this baby isn't either! The images of this baby's little profile are like seeing Luke's sonogram photos again too - I'm hoping this little guy looks just like his Big Bro, with a chin cleft and big expressive eyes.
New Baby can look like Luke, but we hope this little fella is opposite him as far as sleeping goes - Luke was a horror for the first 2 years of his life. Rich and I hope that the price we paid in lost sleep with Luke is enough to get us some rest this January *fingers crossed*. That being said, I'm a realist - who wants to volunteer to keep their phone on from 10pm-6am for me to call when me and Baby are wide-awake? Anyone?
Now that it's been a few weeks, Luke and I have gotten adjusted to calling the baby a boy (it took awhile for both if us) and we are now focusing on getting our house ready, and finding a name. Luke still insists on calling his brother Bird, which we love. I just passed my 6 month point of pregnancy and am feeling good these days, though huge. Here's my latest prego pic:


Baby Boy is jumping and spinning around in there, apparently having a party for one. I love feeling his movements, and now others are able to feel his funky dance moves too, which is awesome. We look forward to when Luke and his Baby Bro are dancing together.
Posted by Momma Lioness Michele at 1:32 PM 3 comments:

This Eggo is Prego

Thank you, Juno, for the words of my title. This Momma has a bun in the oven, another baby lion cub on the way, a little one due in January. I did three things this spring to insure that this happened (well, 3 things besides the obvious...
please don't make me explain where babies come from, mmkay?):
(1) I bought myself clothes that fit and looked good - including jeans. It was an epic shopping day. I even bought one shirt that wasn't on sale! So of course nothing fits now.
(2) Luke graduated from his pre-school program and I purposely kept his summer activity-free, God help me.
(3) Rich and I started talking seriously about spending his 40th birthday in January in Hawaii.


So, really, I wasn't too surprised when we saw this on
May 28th:

Or this at my doctor's the next week:
We're happy that Luke is excited about our new addition: 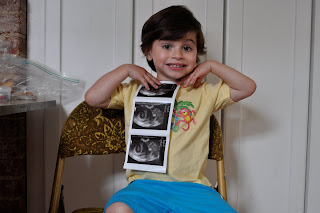 And he's already rocking this shirt: 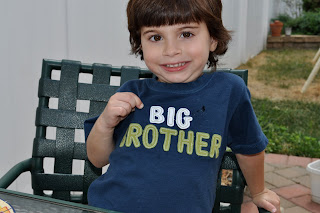 I've been horribly nauseous the past few months with this baby, and the horrendous heat hasn't been kind to us either. Poor Lukie has had a crappy summer so far, stuck in the house with me. Thankfully I'm feeling much better now that I'm 15 weeks along, and the heat has subsided, so Luke can finally have some fun before autumn.


My due date is January 20th, the day before Rich's birthday. Buh bye, Hawaii. *sigh* We'll have something else to celebrate then, though!


I'm trying to keep up with taking pics like this every week:
Here's our latest one, from last week:


I'm growing wide instead of out front. That, and the way I felt in the beginning, is totally different from when I was expecting Luke. Every Momma instinct I have, plus these differences, makes me think this one's a girl. I'm sure of it. So sure that I just might fall off the table if the doctor says otherwise.


So that's our good news! Pretty freakin' major.
Thank you in advance for your good wishes!

Posted by Momma Lioness Michele at 10:21 AM 5 comments:

Trying to Keep My Cool

I've been yelling a lot lately. At this guy, in particular. 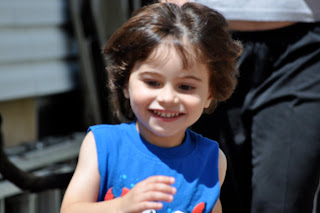 I know, how can you yell at that face, right? I feel awful about it afterwards, of course, but I can't undo it. The horrible relentless heat is somewhat to blame, because we've been marooned inside our air conditioned living room for the last 2 weeks. Luke makes huge messes, seemingly instantly, and spreads them around everywhere - he IS a 3 year old boy, after all. I try to go with it, but sometimes I lose it and lose it hard. We kiss and make up afterwards but I fear the damage my "Mediterranean temper", a term my first boss coined to refer to my hotheadedness, may be doing to our relationship. But Luke innocently finds ways to let me know we're still cool, at least for the time being. Tonight, he was hanging around my neck, literally, and I asked him what was up. He said "I love your neck because it's warm and I love you". He can't be too emotionally scarred if he says things that cute, right? Or when I carry him up to bed after a busy day of running around when he's fallen asleep on the way home. He puts his soft little arms around that neck he claims to love due to its warmness, even in his sleep. Little moves like that let me know that I'm still in good standing with him. But I DO want to stop yelling, or at least yell less (I am a realist). How do you keep your cool when your temper is ready to blow?
Posted by Momma Lioness Michele at 9:50 PM 7 comments: